A model for vortex reconnection

Understanding topology changes in flows, and in particular vortex reconnection, is a crucial issue, e.g. to the singular behaviour of Navier--Stokes and Euler equations, to dissipation (Shelley 1993, Kida 1994, Moffatt 2002)... Reconnection processes are also observed at large scales in the aerodynamical context on wing-tip counter-rotating vortices. These structures are deformed through the Crow instability, and when the perturbation reaches sufficiently large amplitudes, they reconnect into a series of vortex rings, also potentially dangerous for following aircrafts. The goal of this work is to investigate this purely viscous process by DNS, to extract the main mechanisms and to build up the simplest possible model.

A 3D direct simulation of Navier-Stokes equations has been carried out. The system consists in two counter-rotating vortices along the

, the space between them (along

(typically 80% of the aircraft span).

denotes the vertical direction. In a central region hereafter called RCA (region of closest approach), a slight pinch resembling to one wavelength of the Crow instability is put as initial condition.

Figure 1: Vorticity isosurface for the reconnection simulation at

. The selected vorticity level is half of the maximal vorticity far from the RCA. 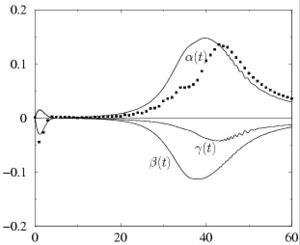 ) evaluated from the above DNS. Square symbols indicate the value of

We could extract the mean main strain rates responsible for the above dynamics in the plane of closest approach (PCA). As we are concerned with 3D vortex curvature effects, the total strain rates

, then averaged in the PCA according to formula:

where integrals are taken over the PCA (i.e.

This gives the three main stain rates along

presented as a function of time on figure 2. The dynamics in the RCA is thus dominated by lateral compression (

In order to test the validity and pertinence of this approach, we have compared

The comparison is presented on figure 3 and shows good agreement.

Figure 3: Vorticity isocontours. At each time: left: cut in the PCA for the 3D DNS; right: 2D simulation with external uniform strain. Simulation at

Figure 4a: Axial vorticity isosurface in the PCA at time

. The central part of the dipole has ejected a vorticity sheet, visualised here thanks to a very low isosurface level. 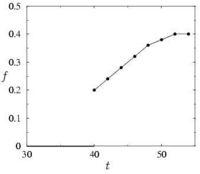 Closer inspection of the central dipole in the RCA reveals a phenomenon that had never been reported before and clearly visible on figure 4a: the two squashed elliptical vortices in the RCA eject a fraction of their vorticity to form a vertical dipolar vortex sheet above the RCA. The lateral compression due to 3D vortex curvature puts the vortices so close that their mutual 2D strain becomes larger than they can sustain: a fraction of the vorticity is then ripped off from the vortices (figure 4b), which then become totally passive under the influence of the newly formed reconnection loops.

With a 2D model, in which 3D vortex curvature effects are taken into account through a simple uniform unstationnary strain field, we were able to reproduce the dynamics at the reconnection point. Discepancies with Saffman's model (Saffman 1990) are found, namely the vorticity ejection whereby the dipole can give away more than 20% of its circulation. The work in progress aims at predicting quantitavely this value.