Coupling of natural convection with radiation in 2D square cavities 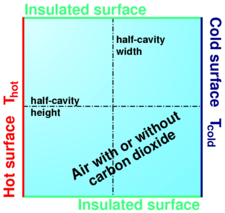 Figure 0: Scheme of the cavity.

This work is part of the COCORAPHA project the aim of which is to determine the most appropriate level of modelization to predict coupled convective and radiative heat transfer for the optimization of thermal efficiency of buildings. In this study we focus our attention on natural convection and radiative heat transfer in a 2D air-filled differentially heated square cavity which is a generic prototype configuration for these applications (see Fig. 0). To this aim, we want to develop a generic way to couple different programs each one specialised in one of the two heat transfer modes involved. In order to develop this coupling methodology we chose to couple a natural convection code written by Shihe Xin which solves the Navier-Stokes equations under the Boussinesq assumption with a numerical scheme based on the finite differences method. The radiation code is developed by Denis Lemonnier (Laboratoire d'Etudes Thermiques (LET) - Poitiers). It solves the radiative transfer equation by means of the discrete ordinates method (DOM). This code was improved to carry out simulations with a real-gas model using the spectral line weighted sum of grey gases (SLW) model. The coupling was implemented using CORBA with the grateful help of Gilles Grasseau (IDRIS: Institut du Développement et des Ressources en Informatique Scientifique - Orsay) in the DEISA (Distributed European Infrastructure for Supercomputing Applications) environment.

Apart from numerical set-up explicitly specified in the text, we use throughout this section a representation of the experimental cavity studied by Nicolas Rouger (LET - Poitiers). This representation is composed by four one meter long walls with a thermal difference between isothermal walls set to

. The reference temperature is equal to

) and radiative properties of the gaz mixture are assumed to be constant in the cavity.

In the following, we start by studying natural convection and gradually take into account radiation on surfaces and in the media.

For a given Rayleigh number, the flow configuration is defined by the cavity height (

) and the walls emissivity (

H. Wang et al [1] noticed that the transition to unsteadiness (corresponding to the critical Rayleigh number

) is trigged earlier by surface radiation when

increases. We performed additional computations for several emissivity values (see Fig. 2(a)) and observe a similar behavior when

Influence of a participating medium corresponding to a grey-gas

In this paragraph we consider the gas to be a participating medium without scattering: it means that the radiative energy emitted by the fluid or a wall is partially absorbed in its direction of propagation by the fluid. The radiative properties of the fluid are modelled as a grey-gas (see Fig. 3(c)). Such a grey-gas is characterised by its absorption coefficient (

); the particular case of a transparent medium corresponds to

. A participating medium is then defined by

greater than zero. Hence, an increase of

results in a stronger homogenisation of the temperature field (see Fig. 1(a)) and in a stabilization of the flow behavior (see Fig. 4): at

and the boundary layer thickness near isothermal walls increase jointly (see Fig 1(c)). In addition we notice that, compared with the case of surface radiation, horizontal mean velocity increases further near the horizontal adiabatic walls (see Fig. 1(b)) .

Coupling of natural convection with radiation using a real-gas model

Because of the complexity of the radiative spectrum of a fluid, we cannot rigorously link the radiative properties of a gaz mixture to a single value of

. For a more realistic simulation we need to use a real-gas model such as the Spectral Line-based Weighted sum of grey-gases (SLW) model [3]. This method assimilates a real-gas as a sum of

grey-gases, weighted by the mixture characteristics.

In spite of the care we took to carry out these 2D numerical simulations (See movie [1] ), detailed comparisons with experimental measurements are not satisfactory because the experimental configuration is fully 3D.

We would like to thank Denis Lemonnier (Laboratoire d'Etude Thermique (LET) - Poitiers) for his fruitfuldiscussions and Nicolas Rouger (LET) for making available his experimental results. We are also grateful to Gilles Grasseau (Idris - Orsay) for the stimulating discussions and his help in implementing CORBA for code coupling.

[3] M. K. Denison, B. W. Webb, Development and application of an absorption-line blackbody distribution function for