Question answering (QA) aims at retrieving precise information in a collection of documents, typically the Web: a user can ask a question such as "Which buildings did Christo wrap?" and get the precise answers "the Reichstag, the Pont-Neuf bridge".

Answer extraction is generally based on named entity recognition, and syntactic analysis of the documents. These techniques require both reliable syntactic parsers, and large semantic bases, which are not always available. In order to implement a robust and easily adaptable answer extraction module, we chose to rely on local syntactic information instead.

The existing answer extraction module first selects sentences in the documents according to their lexical proximity to the question, then extracts potential answers from the sentences. The extraction step depends on the expected answer type : 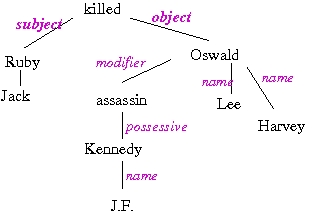 A strategy based on syntactic dependencies has been implemented, in order to improve the results of the answer extraction module. The principle is the following: first, the question is parsed to extract the expected dependency relations on the answer represented as a dependency tree; then equivalent dependency trees are generated, corresponding to the possible paraphrases of the question; finally, each sentence is parsed to test if it matches one of the previous trees.

For example, for the question "What award did Pulp Fiction win at the Cannes Film Festival?", the relation dobj(win, award) is extracted from the question parsing, and thus a relation "dobj(win, <reponse/>)" will be searched for in the sentences, as the following figure shows. 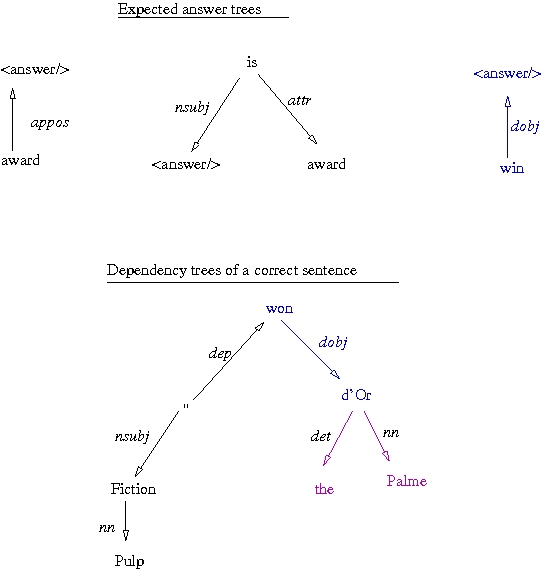 This extraction strategy was evaluated in the English question answering system QALC on the corpus of 200 questions from the QA@CLEF 2005 evaluation campaign. The results for the existing answer extraction module are the following:

The strategy using local dependencies extraction enables to detect 33 correct answers, among which 12 are correct and 8 had not been extracted by the existing module. The results of the QALC system can thus be improved by adding this strategy.