Among the properties that account for the effectiveness of images in human cognition, their analog character is the property that has received the most consideration. Mental images are depictive representations of which internal structure is based on a semantics of resemblance. Not only do mental images contain information, but also this information is organized in meaningful patterns, and this organization is mapped onto the organization of information in the physical entities represented by the images.

Empirical attempts to provide evidence of the analog character of mental images have been crucial in the development of knowledge about imagery processes. Image-scanning experiments have shown that when people are invited to scan mentally across the visual image of a spatial configuration, the greater the distance between two points in that configuration, the longer it takes them to scan the image (cf. Borst, Kosslyn, & Denis, 2006; Iachini & Giusberti, 2004; Kosslyn, Ball, & Reiser, 1978; Mellet et al., 2000; Pinker, Choate, & Finke, 1984). Image-scanning experiments have provided quite consistent and dependable results, from which legitimate claims about the process of mental imagery have been generated, but we still need a behavioral measurement that would make it possible to assess the analog character of the mental representations constructed in mental imagery in an unambiguous fashion. To achieve maximum validity, such a measurement should be collected for a task where participants are invited to process a metric property of the imagined object, and which offers the experimenter a way of comparing their performance with an objective norm.

This condition would be met by a paradigm in which participants are required to form the visual image of a spatial configuration, and then assess a metric property of the configuration, for instance, comparing two distances and deciding which is the longer (or the shorter) of the two. Instead of requiring participants to perform absolute estimations of distances, the task consists of comparing two distances, a task which is very easy to describe in the instructions, and unlikely to elicit diverse interpretations from the participants. Robert Moyer (1973) found that when people are presented with simple physical stimuli, such as straight lines displayed side by side, the greater the difference between the two lengths, the easier the decision, and in particular, the shorter the time taken to respond (see Moyer, 1973; Moyer & Bayer, 1976). This phenomenon was labeled the "symbolic distance effect", and considered to reflect what Moyer called an "internal psychophysics".

Denis and Zimmer (1992) reported an experiment in which participants were invited to learn a spatial configuration either from a visual presentation of a map or from processing a description of it. The configuration included six geographical details that were positioned at its periphery at locations that the description made explicit by using the clock-face conventions of air navigation (e.g., "At 11 o'clock, there is a harbor"). After learning the map or the description, the participants were asked to construct an image of the configuration and to decide which of two designated distances (for instance, "harbor–lighthouse" and "harbor–beach") was longest. Not surprisingly, a distance effect was obtained after map learning, so that the mean frequency of correct responses increased as the magnitude of the difference being assessed increased. More interesting was the fact that a distance effect was also found for the participants who had constructed the mental representation from the verbal description. Recently, Noordzij and Postma (2005) broadened the perspective on the symbolic distance effect following learning of spatial descriptions by using more complex verbal materials than those of Denis and Zimmer (1992). The texts used in their experiment were spatial descriptions of realistic environments, such as a zoo or a shopping center.

However, the studies reported above left several questions unanswered, which the present experiments were designed to answer. A major question pertains to the assumption that mental imagery mediates the process of mentally comparing distances. The involvement of imagery in the mental comparison of objects is attested by the fact that performance declines in response to interference resulting from a secondary task making demands on the participants' visual working memory (cf. Dean et al., 2005). An individual differences approach was used by Paivio (1978) in a study of the symbolic distance effect, which involved the mental comparison of the sizes of angles, where high imagers did perform significantly faster than low imagers. No such evidence has been collected in the domain of distance comparisons, and this was the primary objective of the present study. Below is a summary of the report which was accepted for publication this year (Denis, 2007).

Experiment 1 replicated the part of Denis and Zimmer's (1992) experiment involving the processing of a verbal description. After learning a description, the participants were invited to compare pairs of distances, and the frequency of their correct responses was calculated.

The participants were 20 undergraduates from the Orsay campus. They were a subset of a larger sample of undergraduates (N = 69) who had been collectively tested using a set of five visuo-spatial tests and questionnaires one week earlier in a lecture room of the university. One of the tests was the Minnesota Paper Form Board (MPFB), a visuo-spatial test widely used in imagery. From among the 69 participants, the 10 who had the lowest scores and the 10 who had the highest scores were invited to take part in the experiment described below (hereafter called MPFB- and MPFB+, respectively).

The participants were given two pages listing pairs of distances written side by side (in the form of landmark names designating two distances to be compared). They were instructed to picture the entire map mentally, and then to visualize the two distances designated and compare them.

Figure 1 shows the mean frequencies of correct responses in the distance-comparison task for each set of items and each imagery group. Overall performance was significantly lower for MPFB- than for MPFB+ participants. A significant effect of the magnitude of distance differences was found. There were significantly fewer correct responses to D1 than to D2 items, and to D2 than to D3 items. Furthermore, there was a significant interaction between the two variables. Inspection of the data revealed that performance was significantly lower in MPFB- than in MPFB+ participants for the D1 items, but that the difference remained below the level of significance for the D2 and D3 items. 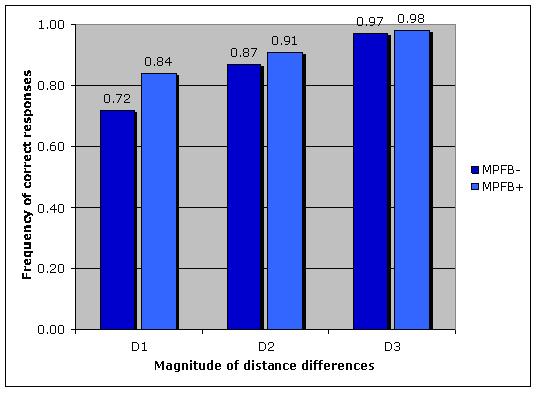 Figure 1: Mean frequency of correct responses as a function of the magnitude of distance differences for MPFB- and MPFB+ participants (Experiment 1).

In summary, high visuo-spatial imagers' superiority was not of the same magnitude for all items. Their superior performance was most marked for the most difficult items, those that involved narrow differences and were thus thought to require the most attentive scrutiny of the image. Not surprisingly, the participants who had the highest imagery capacities enjoyed a cognitive advantage, but this advantage was markedly lower for the items of medium difficulty, and not perceptible at all for the easiest items. This pattern of results is highly meaningful as it reveals that imagery capacities are exploited to a greater extent when distance differences are difficult to estimate. There was no difference in performance between the high and the low imagers for the items where the difference between the two distances being compared was very obvious from the image.

In addition to investigating the frequency of correct responses, we also needed to assess the distance effect by means of appropriate chronometric measures. This was the primary objective of Experiment 2. Another objective of this experiment was to extend the measures made during the distance-comparison task to the earlier phase of constructing the images to be used in the comparison task.

The present experiment investigated the performance of high and low imagers during two phases, namely, during the reading of a spatial description (when the participants were engaged in the process of constructing a visuo-spatial representation of the described configuration) and subsequently during the distance-comparison task (when they were retrieving the corresponding information and making their comparisons).

The times taken by the participants to mentally review the configuration were recorded after the third reading episode (Review 1) and the sixth one (Review 2). Review 1 took longer than Review 2, and reviewing times were overall longer for low than for high visuo-spatial imagers. 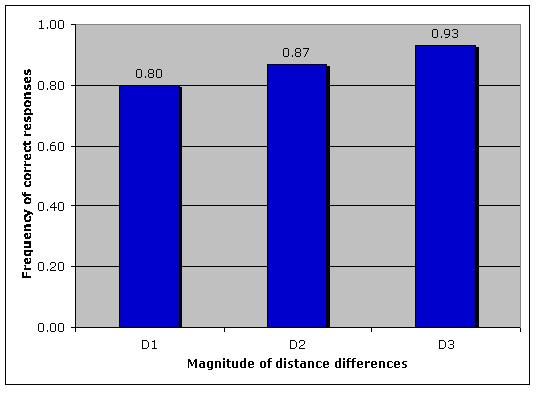 Figure 2: Mean frequency of correct responses as a function of the magnitude of distance differences (Experiment 2). 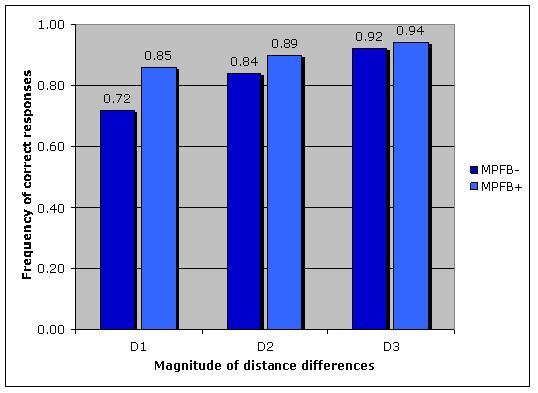 Figure 3: Mean frequency of correct responses as a function of the magnitude of distance differences for MPFB- and MPFB+ participants (Experiment 2). 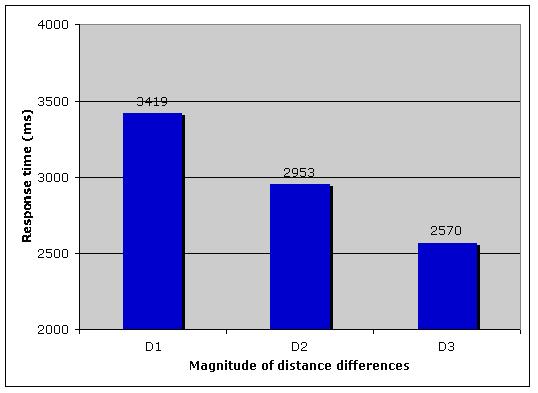 Figure 4: Mean response times (ms) as a function of the magnitude of distance differences (Experiment 2). 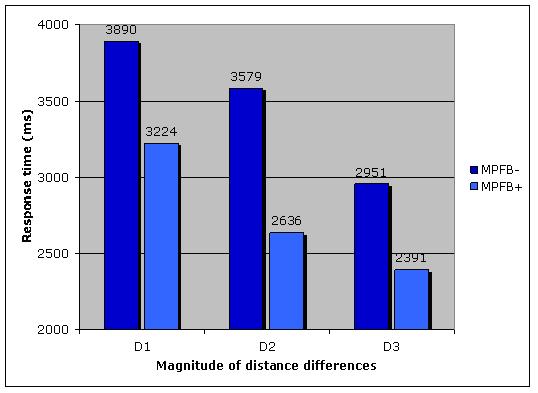 Figure 5: Mean response times (ms) as a function of the magnitude of distance differences for MPFB- and MPFB+ participants (Experiment 2).

The major finding of Experiment 2 was to provide a further demonstration of the symbolic distance effect during the processing of visual images, in the special case where these images have been generated from a verbal description rather than being reconstructed from long-term memory. The experiment provided information about the time required to perform mental comparisons of distances. As the distance differences increased, not only did the frequency of correct responses increased, but response times also systematically decreased, contributing to the signature of the symbolic distance effect in our study. Furthermore, response times were shown to be affected by individual imagery capacities. People with the highest imagery capacities had shorter response times than low imagers, which suggested that they found it easier to access the metric information contained in their mental images. Presumably, their images contained more accurate information, which increased the likelihood that they would produce correct responses, and produce them in shorter times.

People's ability to construct images from verbal information is a well-established capacity. Not only can such images be constructed and contain information, but, more importantly, they can also provide accurate metric information. The existence of the symbolic distance effect is compatible with the idea of an analogical representational substrate, although it does not in itself provide a definite demonstration that mental imagery is used in distance comparisons. By contrasting high and low imagers' performance, we have provided a more valid approach to this question.

Denis, M. (2007). Assessing the symbolic distance effect in mental images constructed from verbal descriptions: A study of individual differences in the mental comparison of distances. Acta Psychologica (in press).