On the acoustics of the clavichord

C. d’Alessandro, B. Katz, in collaboration with C. Besnainou

The "King of Sweeden" Zuckemann clavichord

The clavichord and measurement devices in the acoustic room

Microphone above the soundboard

Accelerometer on the tangent

The clavichord is, together with the pipe organ, one of the earliest keyboard instruments. It derived from the keyed monochord. Rather than a musical instrument, the monochord was a physical instrument demonstrating the mathematical theory of numbers and harmonic proportions, known since Pythagorean time. The clavichord as a musical rather than mathematical instrument appeared at the end of the middle ages (XIV-XV century). Compared to other keyed instruments, the clavichord allows for a direct control of the sound by the player’s fingers, as the key remains in contact with the strings during all the tone. This specific feature makes the clavichord the most sensitive keyboard instruments. It has been (since the middle-age) and it is still nowadays the preferred practice instrument for most organists and composers, particularly in the German speaking world, (J.S. Bach, W.A., Mozart, G.F. Händel, and J. Haydn used to play and compose with the clavichord, just to cite a few).Comprehensive information on the history, aesthetics, repertory, and performance practice of the clavichord can be found in the authoritative book by B. Brauchli.

Aims of the study

The clavichord is an ideal choice for studying the keyboard interface, i.e. the interaction of the player and the instrument for expressive purposes.

The aims of this study are manifold: sound documentation of historic instruments, tonal features and tonal portrait of a specific instrument, understanding of the control parameters for a keyboard interface, study of expressive musical control, understanding of sound production in the clavichord and consequences for new interfaces for musical expression.

Among keyboard instruments, the clavichord is a unique combination of simplicity of action and subtlety of building and playing. To date it has been only marginally considered in the acoustic literature, despite its remarkable interest as a musical instrument, and its very special expressive control capabilities. As only a few studies have been devoted to investigating the acoustic of this quiet instrument, the aim of this page is to report on experiments recently conducted by at LIMSI. The first experiment addresses the effect of dynamic nuances on the clavichord tones. Measurements of tangent acceleration, velocity and motion are provided. The main findings are: the amplitude of the instrument covers a dynamic range of about 50 dB; the presence of a linear relationship between sound pressure level and the velocity of the tangent; and the absence of increased spectral richness with loudness, contrary to the piano. The second experiment deals with the effect of sympathetic resonance in the clavichord sound. The sympathetic strings of the clavichord respond as a type of reverberation, being mainly effective above 500 Hz. There is also a noticeable reverberant effect from the lowest played notes, which are not well damped.

Instruments in this study

The instruments currently under study are:

The object of this research is to measure a number of acoustical and mechanical features that are associated with the sound (timbre, dynamics, duration) and playability (dynamic range, key velocity) for a particular clavichord. The tonal portraits are based on recordings of each note of the instruments performed in an anechoic room. These measurements are including:

The instrument is installed in an acoustically treated highly damped sound-proof booth. Acoustic measurements are made with a measurement microphone 30 cm above the soundboard. Simultaneous recordings of sound, tangent acceleration, and tangent/string contact signals are performed. The tangent velocity and displacement are then derived from the acceleration signal. The tangent-string contact signal is obtained by using the tangent and string as a circuit switch: when the tangent is in contact with the string, the circuit is closed. By constantly monitoring the tangent-string contact, it is possible to check that the contact is always maintained while depressing the key. The acceleration signal is obtained using an accelerometer attached to the key, just below the tangent. The mass of the accelerometer is smaller (mass ≈ 2.2 g) in comparison to that of the keys (mass ≈ 20 g), by a factor of ten.

For fretted instruments, in some situations, a second accelerometer, and a second contact signal are used, because interesting results are obtained when exciting a same pair of strings with different keys. For each note of the instrument, and for dynamic nuances ranging from just audible sounds to maximum power, the key movement (acceleration, velocity, and displacement) and the resulting sound are recorded.

The findings of the current measurement and analysis study of the clavichord have shown the following regarding the acoustic effect of dynamic nuances: 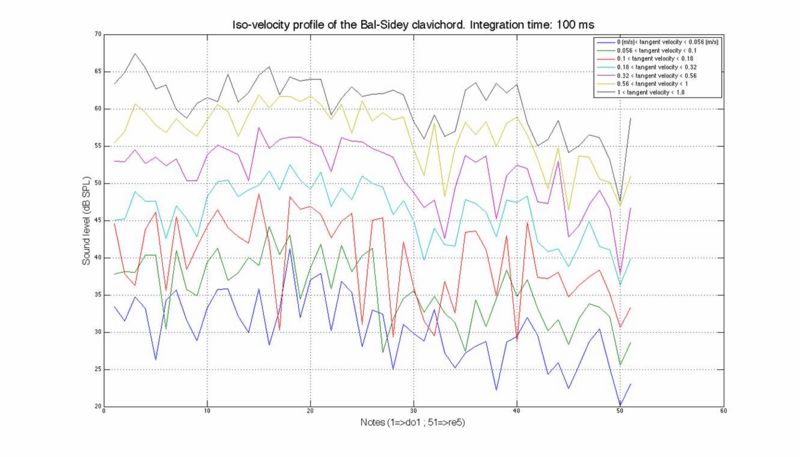 In addition, fundamental frequency variations and attack and release noises are also an indication of dynamics, but are generally considered undesirable. Measurements of these effects are outside the scope of the present study. The clavichord shows a specific behaviour in terms of dynamics, compared to other stringed instruments. In the harpsichord, the SPL is almost constant, whatever the velocity of the action. Spectral richness is also almost invariable, but the sound is spectrally rich. In the piano, both SPL and spectral richness vary as a function of action velocity, but the spectral richness is always limited. The clavichord situation lies in between. When the action velocity increases, the SPL also increases, but the spectral richness does not change much.

We measured the acoustic impulse responses (impulse hammer, on the bridge and the soundboard)for music and sustained tones, under 8 measurement conditions:

Decay times by frequency bands were derived from these measurements. 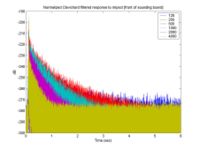 This study provides numerical data on the reverberation effect of the sympathetic strings of the clavichord. These strings appear to provide high-pass reverberation: being mainly effective above 500 Hz. After the first 0.2 – 0.6 sec of the tones, and for low notes, there is also a noticeable effect of the low played notes that are not well damped (the amount of felt damper is less for the low notes). Resonances of the cavity seems to play little role in the early part of the note, but have some effect later, for lower rank harmonics. Sympathetic strings are significant for the clavichord for many reasons. Its sound is generally quiet, thus the audience is very concentrated and close by allowing relatively small effects to be perceived as significant. The clavichord is a rather percussive instrument: reverberation is a useful means to enhance tone duration, especially as the clavichord is often played in smaller rooms with a less pronounced acoustic. Several different types of clavichords have been designed during the long history of the instrument, from the XVth century to the present era. The instrument studied here (a copy of a south German XVIIIth century unfretted model) is one possible design, and it is expected that large variations may occurs between different designs. One can suspect a more pronounced presence of sympathetic resonances in the “giant” XVIIIth century north German or Swedish clavichords. Future work will be devoted to systematic comparisons of the acoustic characteristics of historic instruments from different schools. More investigations on the physics of sympathetic string excitation and behavior are needed.

We presented here the first result of an on-going study of the acoustics of the clavichord. Future work will be devoted to several aspects such as: sound documentation of historic instruments, tonal features and tonal portrait of a specific instrument, understanding of the control parameters for a keyboard interface, study of expressive musical control, understanding of sound production in the clavichord and consequences for new interfaces for musical expression.

Main references to this work

General references on the clavichord and its acoustics