Undesirable temperature overshoots may be encountered e.g. during a starting up operation or in a more general way during a steep heating procedure. That still stands when boiling is involved in the cooling process. It is therefore important to gain information about the boiling performance of a device submitted to transient heating conditions. Investigations on small heating elements with negligible thermal inertia are of particular interest considering the current development of micro-heaters technology in which rapid phase change phenomena and large heating rates (

>) are involved. Applications of concern are for instance thermal ink jet printers or micro-actuators.

The present study considers a thin brass wire, 25 µm in diameter immersed in a large pool of saturated liquid nitrogen. Transient heating experiments are performed using a stepwise heating procedure. The boiling performance of the system measured under transient heating conditions is analysed with the help of the quasi-stationary boiling curve.

The thin wire is immersed in a large pool of liquid nitrogen under saturated conditions and atmospheric pressure. Heating steps of variable intensity are supplied to the wire in order to scan the whole boiling curve. For every run, the step duration is long enough to achieve stationary boiling conditions. The wire is thermo-resistive which makes it both a heater and a thermometer: The heat flux transmitted to the bath and the wire superheat are determined through electrical quantities. The initial condition is controlled by the means of two parameters: the system temperature and the presence of pre-existing vapour entrapped in the cavities. 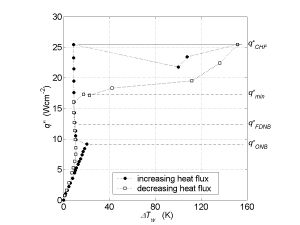 A typical boiling curve obtained under quasi-stationary heating conditions is presented in Fig. 1. One observes the classical nucleate and film boiling regimes. The relevant boiling points, specific to each boiling system, are also indicated on the curve: these are the onset of nucleate boiling (ONB), the beginning of fully developed nucleate boiling (FDNB), the critical heat flux (CHF) and the minimum heat flux (min). 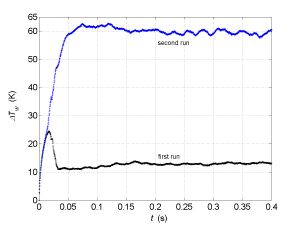 Figure 2: Time evolution of the wire superheat for two runs carried out with a high nucleate boiling heat flux

. Even though early stages are similar in both cases, boiling incipience leads to nucleate boiling in the first run while boiling crisis occurs in the second run.

Analysing the wire superheat associated to boiling incipience, it has also been shown that the nucleation process results from the activation of pre-existing vapour embryos entrapped in the cavities of the wall. A gradual activation of the nucleation sites is observed for low values of the applied heat flux. Values higher than

(minimum heat flux for fully developed nucleate boiling measured under stationary heating conditions cf. Fig. 1) lead to explosive boiling incipience in which bubble dynamics and interfacial motions are intense enough to produce an acoustic emission (Fig. 3). The wire superheat associated with this kind of boiling onset is reproducible. Its value is similar to the upper limit of the incipient superheat measured under stationary heating conditions. The smallest cavities of the wall are therefore mainly involved during boiling incipience at high heat flux. 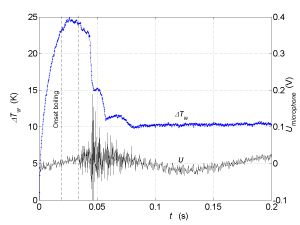 Figure 3: Acoustic emission associated to explosive vapor bubble growth: the signal recorded from the microphone is superimposed with the wire superheat. The applied heat flux (

Analysing the boiling performance of the system induced by transient heating conditions in light of the stationary boiling curve, this study allows identifying the heat flux range in which boiling crisis will or is likely to happen.

Besides, it has been shown that nucleate boiling onset induced by a stepwise heating occurs in a narrow range of wire superheats in comparison with the one measured under quasi-stationary heating conditions. This particular feature might be useful in situations for which a proper control of the boiling incipience conditions is required.