The expansion of augmented and virtual reality in various application fields raises the question of multimodal interfaces in 3 Dimensional (3D) enhancement. Our research focuses on multimodal visual input and output by combining 3D views with 2D views offered to multiple users (see figure 1). The setting we chose to study combines a 2D view browsed on a collaborative tabletop device and a 3D stereoscopic view projected on a wall screen. This setting is interesting for its complementarity views and concurrent 2D and 3D interactions on geometrical objects. The concurrence of interactions is a major issue in this type of combination. We have formalized this problem of sharing the different modes of interaction through a Petri net model. We implementated this model for 3D object positionning and allowed a division of the Degrees Of Freedom (DOF) by the users. 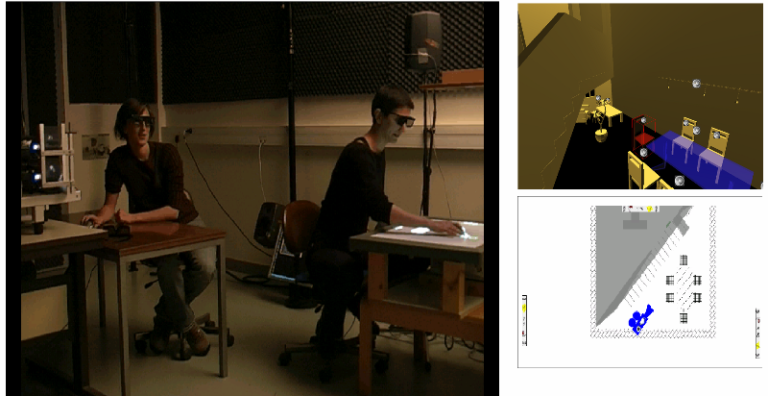 The use of multimodal interfaces is increasing in virtual and augmented reality field. Various works concentrate on multimodal input interfaces by combining gesture and oral interactions to compensate the lack of mouse-level usable 3D device. Other works focus on multimodal output systems by combining visual and haptic feedbacks to improve user immersive experience. Multimodal system refers to a system allowing multiple communication channels. We do not focus on multimodal input or output systems separately but on combined visual multimodal input and output. The goal of this combination is to link collaboration and the lack of a mouse-like 3D input device. Our system enables two different types of presentation of the same virtual world. Both views are complementary (when a piece of information perceived through one view is not perceived through the other one) and redundant (the same piece of information can be perceived through both views).

We combine a 3D immersive view projected on a wall screen and a 2D view projected on a collaborative tabletop device called DiamondTouch (developed by MERL). The 2D view can be seen as a bird eye view of the virtual scene showing one or more cameras. Cameras represent the position of the point of view and the orientation of the 3D view(s) in the virtual world. Our solution to the concurrence problem is based on splitting the DOF of manipulation of a virtual object between 2D and 3D view. It relies on a software architecture with three components (See figure 2):

Figure 2: Software architecture (in green) linked to the input/output hardware (in violet)

Concurrence management is a major issue in this study that is addressed through two types of multimodal interaction:

In this mode, one virtual object can be manipulated through one and only one of the 2D or 3D components at the same time. To implement this mode, we designed an independent Petri net (Figure 3) for each virtual object in the central component. The Petri net of a given object manages who gets the access right to manipulate it. It also manages if another user requests to manipulate the same object through another component. 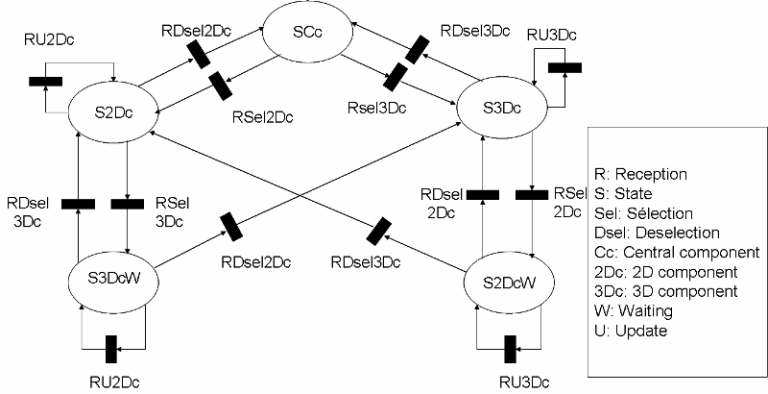 Figure 3: Petri net designed for each object at the central component level.

In this mode, simultaneous interaction with an object through the 2D and 3D interfaces is made possible. To implement this mode we designed Petri net (Figure 4) for each spatial attribute related to a DOF of an object. The Petri nets indicate which component has the permission to change the given attribute of the given object (e.g. a Petri net like in figure 8 now exists for the x-position of a virtual object). As we can see, the Petri net designed on each attribute of an object are more complex than the Petri net designed on each object for the exclusive mode. This complexity arises with the need to block some types of interaction. We consider blocking interactions through one component if a given type of interaction is made through the other one (e.g. rotation of an object through the 2D view is not allowed when the same object is translated through the other view). 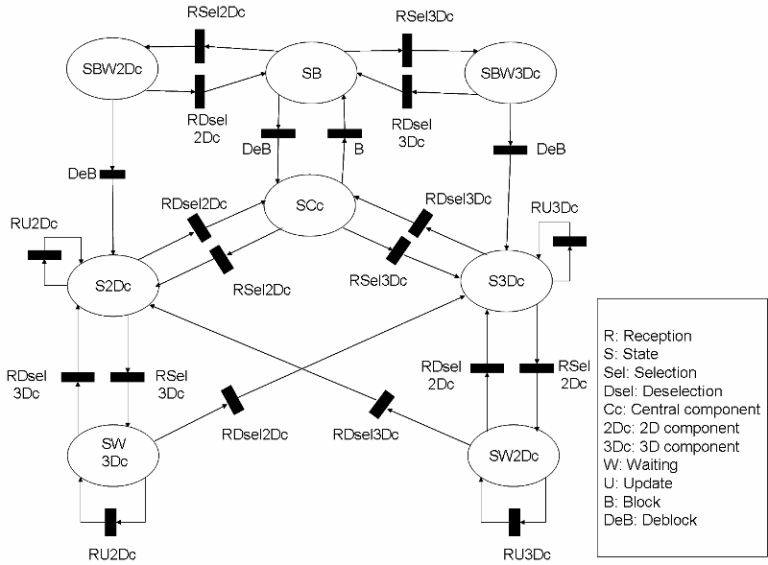 Figure 4: Petri net designed for each geometrical attribute of a virtual object at the central component level.

The application domain we used to guide the design of our system is architecture and urbanism. The use of virtual and augmented reality is studied more and more in these domains. This application field inspired us mostly because of the different modalities used by the multiple actors in such projects. Architects use to work on 2D plans and have to imagine easily the global 3D form of the project. Craftsmen are also used to work with 2D plans. On the other hand, customers wish to visualise a realistic view of the project in 3D to make decisions. More over, manipulation through both views is very pertinent because all these actors need to work together. Architectural design field supports plenty of different representations and incites us to improve our 2D presentation of 3D virtual objects. It also suggests us to explore new collaborative interaction techniques for object deformations.