Figure 1: Configuration and schematic representation of the baseflow.

The flow between two parallel rotating disks besides applications to turbomachinery can also be regarded as a class of fundamental flows. This assertion becomes self-evident as the aspect ratio

is the disk radius and

is the inter-disk spacing) is very large. In such case, self-similar solutions valid for disks with infinite radius are a good approximation of the exact solutions of the realistic closed geometry (i.e. finite radius). The self-similar solution is valid in the core region (see figure 1) but restrictions apply in the end-region or when the Reynolds number is above a threshold for which the flow is prone to instability. The Reynolds number is here defined by

being the magnitude of the angular velocity and

the kinematic viscosity. In two different studies [1] and [2], we focus our efforts on the particular case of exactly counter-rotating disks and address the question of the stability of such flows. 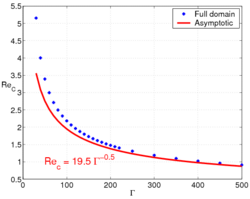 In a first study [1], we restricted ourselves to axisymmetric perturbations. In figure 2, the critical Reynolds number for the first bifurcation is plotted as a function of the aspect ratio. It is tempting but erroneous to think that the instability is a shear flow like instability. In such case, as the amplitude of the perturbation is large close to the end region (see figure 3), one would pick a scaling with

stands for the dimensional radius; the critical Reynolds number as defined in the previous section would have scaled as

. Obviously, this does not fit with the full domain numerical results in figure 2 for which a scaling law is

. Another explanation has to be found.

In the asymptotic analysis for large

, the appropriate scalings lead to the Navier-Stokes equations in a Cartesian frame (i.e. all curvature terms vanish) with an additional centrifugal acceleration. In the core region and to leading order, the base flow is a parallel flow. This allows us to use a Fourier decomposition along the radial direction (see figure 4). The results of the linear stability analysis of this parallel flow are in good agreement with the full domain simulations not only qualitatively (see figure 3 and 4) but also quantitatively (see figure 2) which proves that the key ingredient of the instability is well captured in this simple model. The 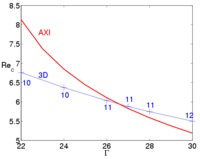 Figure 5: Critical Reynolds number versus aspect ratio.
In a second study [2], the bifurcations and the nonlinear dynamics are numerically and experimentally investigated. A linear stability analysis performed for

shows that nonaxisymmetric and axisymmetric modes can be stationary or time dependent in this range. Three-dimensional modes are dominant for

while axisymmetric modes are critical for

(see figure 5). The restriction to axisymmetry in the study [1] finds herein some justifications. In the particular case of

, nonlinear computations are performed at Reynolds numbers slightly above threshold and are compared to experimental results, showing the competition between axisymmetric and three-dimensional modes. For such aspect ratio, the linear stability analysis predicts

are all unstable. In figure 6, time evolution of dominant modal energies shows that

and, for three-dimensional modes, only

and its harmonics (not represented) remain and contain

of the total fluctuating energy. This result could not be predicted by the linear stability analysis as growth rates for

are smaller than the one for

Different tools have been used to study the stability of the flow between two exactly counter-rotating disks. An asymptotic analysis allowed us to find the mechanism of the dominant axisymmetric instability for large aspect ratio which takes place in the core region and gets stronger as it moves toward the periphery. The linear analysis showed that three-dimensional modes exist and nonlinear computations revealed that their amplitude stays relatively weak with patterns confined very close to the periphery of the disks as shown in figure 7. All these results and observations are in qualitative agreement with an experiment performed in Laboratoire d’Etudes Aérodynamiques de Poitiers (see figure 8). The three-dimensional mode selection in the nonlinear regime is still an open question. The case where the z-symmetry is lost, e.g. imposing different angular rotation rate of the disks, will be an interesting extension of the present work.