Thermocapillary convection in a laterally heated liquid bridge is studied numerically, using a Chebyshev spectral method. The stability of the axisymmetric basic state, with respect to 3D perturbations, is characterized over a large range of Prandtl number values (

Hydrodynamics in a laterally heated liquid bridge is studied in a zero gravity environment. This configuration is related to the floating zone crystal growth technique, that consists in translating a feed rod through a heating coil: the material progressively melts and solidifies on a seed as a single crystal. Experiments have shown detrimental striations in the chemical composition of some crystals. They are due to oscillatory thermocapillary flows. It is thus interesting to study the mechanisms responsible for the instability of the steady flows with a view to obtain higher quality products.

The mathematical model and the numerical methods

A simplified model of liquid bridge is adopted. The liquid is maintained by capillarity between two parallel concentric, solid and isothermal disks; they are kept at the uniform melting temperature. Neglecting static and dynamic deformations, the free surface is assumed to be cylindrical. It is submitted to a steady heating flux.

The thermocapillary convective flow is governed by the Navier-Stokes and energy equations associated to boundary conditions which include the source of the flow. The mathematical system is solved with a spectral collocation code. A continuation method based on a Newton algorithm allows to accurately follow the basic states with respect to the Marangoni and Prandtl values. Due to the geometry of the liquid bridge and the symmetry of the boundary conditions, the basic state is a 2D steady flow mainly constituted by two toroidal cells which are mirror symmetric with respect to the equatorial plane. The stability of the flows is investigated by an Arnoldi solver.

These results are published in the referenced paper. 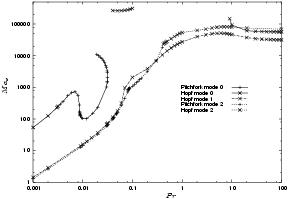 Figure 1: Critical Marangoni value and bigurcation type as a function of the Prandtl number value

Figure 1 indicates the bifurcation types and critical Marangoni values of the modes k=0, 1, 2 as a function of the Prandtl number value. For all studied Pr values, we observe a transition of the axisymmetric steady flow to a three-dimensional flow. At low Prandtl number values, Pr < 0.3, the first destabilizing eigenmode is real and corresponds to a wave number 2; it is directly followed by an oscillatory disturbance with wave number 1. While for Pr > 0.3, the two first disturbances are oscillatory modes with wave number 1 and 2 or 0 respectively. The behaviour of the Ma_c thresholds and frequencies in case of Hopf bifurcations are quite different at low and high Pr number values. The constant value of the critical Reynolds number Re_c= Ma_c/Pr, at low Pr, indicates hydrodynamic perturbations while at, Pr>1, the rather constant Ma_c value is the signature of hydrothermal perturbations.

Figure2: At Pr=20, temperature isolevels and velocity vectors of the oscillatory mode 1 on half a period.

For large ranges of Prandtl values, the first destabilizing eigenmode breaks the symmetry around the equatorial plane. It is the case of the mode k=2 for

. Figure 2 shows the structure of the oscillatory mode k=1 at Pr= 20 : the mirror symmetry is broken.

The important point, particularly for the experimenter, is to know what will be the non-linear flow behaviour at a Marangoni value just above the two thresholds. 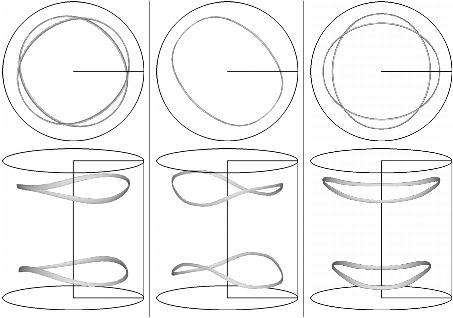 Figure 3 exhibits the flow loci where the velocity is zero at Pr=0.01, Pr=0.06 and Pr=0.2 respectively, at a time equal to 1500 thermal time units. All the odd modes have canceled. The mode k=2 prevails in the instability behaviour. In the regions where this mode is not symmetric with respect to the equatorial plane (left and right panels), there is a

shift between the upper and lower curves related to the azimuthal component of the mode 2 while its axial velocity has moved the tori hearts is the same axial direction. This shift does not exist in the center panel where the tori hearts are moved in opposite directions. This is in complete agreement with the symmetry properties of the components of the destabilizing modes. 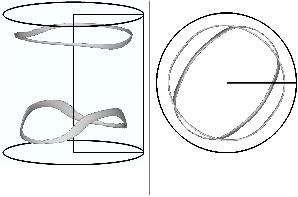 The flows at Pr=0.06 and Pr=0.2 are stable past 1500 thermal time units. Such is not the case for Pr=0.01. The resulting flow is unstable via a mode 1, different from the one obtained with the linear stability analysis of the basic flow: it is now a steady mode. Thus, the non-linear 3D flow at low-Pr does not always keep the properties nor structure of the initial critical modes. The resulting saturated 3D flow is neither symmetric nor anti-symmetric with respect to the mid-plane, as shown in Figure 4.

of the perturbation (upper panel) and of the 3D flow without the 2D contribution (lower panel) at Ma=35000.

Figure 5 depicts, in an axial cut, at

, and on a half-period, the temperature isolines and velocity vectors of the disturbance (upper panel) and of the 3D flow without the axisymmetric contribution (lower panel). The flow is clearly governed by the destabilizing mode dynamics. Bringing Figures 2 and 5 together, shows that the region of the steady state near

are shifted in opposite radial directions in a plane along

, while, at the same time, the fluid is successively pushed up and down near the free surface.