A new method for voice source estimation is evaluated and compared to Linear Prediction (LP) inverse filtering methods (autocorrelation LPC, covariance LPC and IAIF [1] ). The method is based on a causal/anticausal model of the voice source and the ZZT (Zeros of Z-Transform) representation [2] for causal/anticausal signal separation. A database containing synthetic speech with various voice source settings and natural speech with acoustic and electro-glottographic signals was recorded. Formal evaluation of source estimation is based on spectral distances. The results show that the ZZT causal/anticausal decomposition method outperforms LP in voice source estimation both for synthetic and natural signals. However, its computational load is much heavier (despite a very simple principle) and the method seems sensitive to noise and computation precision errors.

The Zeros of the Z Transform (ZZT [2]) is a new speech decomposition method that denotes with traditional linear prediction (LP) based algorithms as it relies on a mixed phase model of speech production. This model will be first presented, then the algorithm used for the ZZT decomposition. Our goal here is to show a comparative study of the ZZT versus widely used LP methods, the protocol used and some of the results obtained are also shown here.

The comparision will first take place on synthetic signals (with 4 of the 5 glottal parameters varying), then on real speech sample. 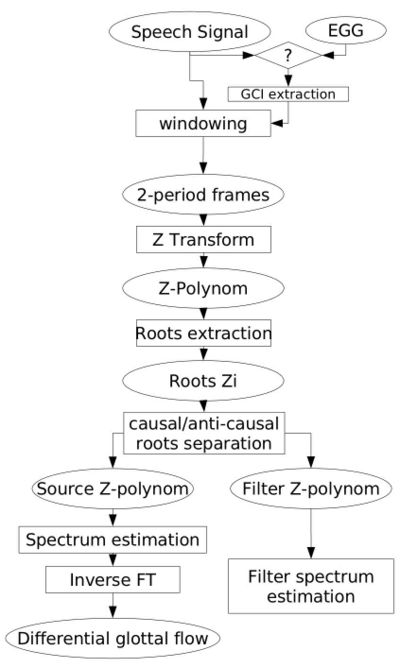 ZZT algorithm relies on exact positionning on the analysis window. In order to achieve maximum phase coherence, the center of the anaylsis window (chosen to have the best size at two times the pitch period) has to be on a glottal closing instant (GCI). Those instant can be estimated by various method, and we chose here to record simultaneous EGG signals on real speech, in order to extract GCI and open quotient

The inverse filtering uses LP estimation of the vocal tract filter. Each of the four algorithm presented has its own pros and cons, and was chosen for its simplicity and/or its widespeard use. When the vocal tract filter transfer function A is estimated (A being the autoregressive filter coefficient), glottal flow is obtained by filtering :

Synthetic test signals are generated using the LF model [7] rewritten as in [8] and a formant synthesizer with three implemented filters : a synthetic /a/ and /i/ computed according to common formant frequencies and bandwidths and two natural filters obtained by lpc analysis : real /i/ and real /u/.

parameter in the LF model) are varying among test condition. The remaining parameter, the return phase quotient, is set to zero as it belongs to the causal part of the differential glottal flow and can therefore not be estimated by ZZT. Preliminary tests showed that the effect of the return phase quotient on lp-based source estimation is negligible. This parameter is then not considered in this study.

The test is performed with the following parameter variations: 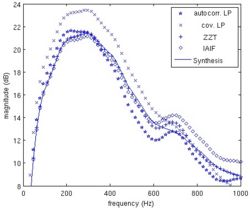 The evaluation criterion is based on spectral distance between estimates and synthetised glottal flows. When trying to estimate other source parameters than the open quotient, fine estimation of the source spectrum has a proeminent role. This is why this criterion was chosen, because spectral distance does not only measure adequacy in formant frequency and bandwith estimation, but also on spectral tilt restitution on the source spectrum. The error

, is computed on a restrained range of frequency :

The frequency range was chosen to be from 0 to 4000 Hz to evaluate the low frequency accuracy of the estimation, that is mainly linked to the value of

. Also, since GCI is imposed by the ZZT estimation method, it's high frequency accuracy is substantialy better and a wider frequency range would have disadvantaged LP estimation.

Direct results of the benchmark are the cumulative spectral distances presented on table above. Lowest values (highlighted in dark yellow) represent the closest spectrum to the original used for synthesis ; note that in every condition ZZT gives the best result by far, and that IAIF and autocorrelation LP show both good performances too.

Spectral distance results are leading to the following observations:

estimator. Since it is performed on a very short signal segment, the autoregressive filter order may probably be too small for accurate estimation of the vocal tract filter. Nevertheless, the overall low frequency restitution of the glottal formant is realist.

to be useful for fitting even the worst signals. However noise and ripples on the estimated differential glottal waveform make it hardly usable for parameter extraction or analysis.

estimation in this benchmark. However, tests on signals are using long analysis window, exploiting the time invariance assumed by the method. This is not always realistic for actual time-varying real speech signals. Furthermore, it can be seen on the table that the worst cases are those were the pre-emphasis does not completely suppress the glottal formant : low

values leading to a glottal formant at two or three times

, and low values for

leading to a more resonant formant. 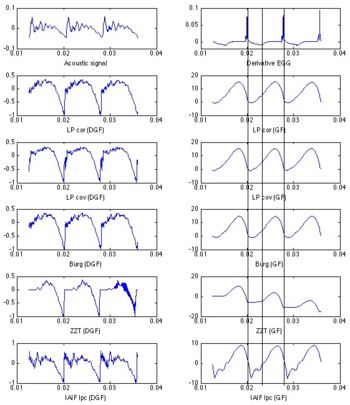 Source estimation examples are presented in the right side figure. It presents source estimations for a real speech signal. Both glottal flow and its derivative are shown for each method. An Electroglottographic reference is available for this example, showing that the open quotient is about 0.5 (i.e. the closed phase of the source is about half of the period).

In this example, the ZZT is the only method giving a closed phase of about 0.5. And therefore the only method meeting the asumption that there is no acoustic flow during the closed phase. The slight slope of the ZZT estimated glottal flow is an artefact of the spectral reconstruction. This example also shows that ZZT could be used for direct parameter estimation, such as

In this paper a new deconvolution method has been evaluated, based on an all zero estimation of the speech causal/anticausal linear model. It was compared with linear prediction based inverse filtering. The results showed that ZZT is a promising deconvolution method, able to outperform LP inverse filtering in every speech condition. Moreover the ZZT seems to be powerful for estimation of the glottal flow and its parameters, such as Oq. The main drawbacks are the computational cost, lack of robustness for noise corrupted signals and the paramount importance of accurate glottal closing instant detection.