Voicing assimilation in French is often considered to be an all-or-none phenomenon and generally viewed as purely regressive [1,2]. More recent studies [3,4] propose that voicing assimilation is better viewed as a gradient than a categorical phonetic variation. In the reported study we address voicing assimilation in French by making use of a large corpus of radio broadcast news speech (90 hours). This kind of data differs from spontaneous speech but is closer to natural speech than the read speech materials used in most studies, with the exception of a few studies on spontaneous speech reduction (e.g. [5]). Voicing assimilation is addressed via two complementary approaches: acoustic measurements and an innovative Bayesian framework. Using the latter approach, voicing alternation is investigated globally, including a million of consonantal segments, before focusing more specifically on assimilation contexts (5% of consonants), defined as C1#C2 contacts, with C1 and C2 having opposite voice features (NV#V, V#NV). Assimilation results are compared to control situations, i.e. C1#C2 contacts where C1 and C2 have identical voice features (NV#NV, V#V). Assimilation contacts in French frequently involve function words such as in avec des, chef de guerre, cette guerre, trouve que, peuvent pas, even though more classically investigated sequences generally correspond to adjective noun contacts (république démocratique, sept jour). A large number of proper names also contribute to both assimilation contacts (Dominique Voynet, Elisabeth Guigou) and control contacts (Jacques Chirac, George Bush).

In French, the main cue for voicing contrast consists in the presence/absence of glottal pulsing. The used measure is a voicing ratio (Snoeren et al.), defined as the proportion of voiced frames per phone segment. The phone segments are automatically located using the LIMSI alignment system [6], together with a canonical pronunciation dictionary. The alignments allow to locate both assimilation and control contacts. Acoustic measurements are then carried out according to voicing contact (NV#NV, NV#V, V#NV, V#V) and contact segment durations.

We used the F0 extraction module in Praat [7], with a 3 ms time-step and otherwise standard settings, to determine voicedness, thus, for both consonants, a voicing ratio (v-ratio) in the 0-1 range, as a measure of voicing degree. The v-ratio tells us whether a consonant is fully voiced, fully voiceless, or incompletely voiced. In the latter case, the question arises as to which portion of the consonant is voiced: does regressive assimilation entail that the observed partial voicing spreads backward from the right to the left? The role of segment duration is also investigated: are shorter segments more frequently assimilated? or more strongly assimilated?

A voicing alternation (VA) measure reports the number of changes between underlying and surface form voice features. We first examine the validity of the proposed method: to what extend the observed results can be considered as reliable? To do so, we compare a global voice alternation rate, expected to remain close to zero, and between-word voice alternation on assimilatory C1#C2 contacts. Here alternation rates are expected to grow for C1, given the regressive nature of voice assimilation in French.

In Figure 2 we examine how v-ratios of C1 and C2 vary according to sequence duration and contact condition. Assimilation (V#NV, NV#V) and control contact sequences (NV#NV, V#V) are grouped into four duration classes. The left part of Figure 1 shows average v-ratios for C1, the right part corresponds to C2 v-ratios. The shorter duration classes (C1#C2 below 180ms) gather a large majority (85%) of the data. Longer durations are less reliable as pauses or other events might occur between the C1#C2 contacts. We comment the two shorter duration classes. As a first observation, we can say that C1 voiceless consonants (left, upper box) have relatively high average v-ratios: 0.4 in the NV#NV control condition. As expected v-ratios increase (around 0.7) for the NV#V assimilation condition highlighting the impact of regressive assimilation. The C2 voiceless consonants (right, upper box) have very low v-ratios (below 0.2) and a potential effect of progressive assimilation remains marginal. 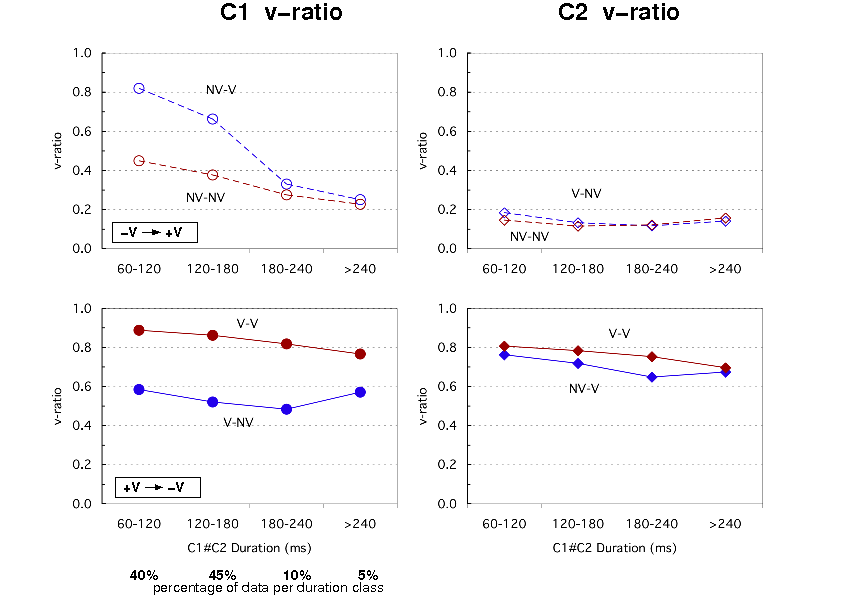 In order to get a more informative representation than average v-ratios (Figure 2), C1#C2 v-ratio distributions are displayed in Figures 3 and 4 for the assimilation conditions V#NV and NV#V. The right part corresponds to the matrix of v-ratio measurements of C1 (vertical) and C2 (horizontal) grouped into 10 v-ratio classes. The left part shows the predictions, corresponding to the underlying voice features of C1 and C2 in both V#NV (upper) and NV#V (lower) conditions, the arrows indicate how the underlying voice features are supposed to distribute in case of regressive or progessive assimilation.

Comparing the underlying voice features to the measurements, Figure 3 confirms that assimilation is mainly regressive for V#NV contacts, the C1 average v-ratio of 0.6 corresponds to a bimodal distribution with modal values for either fully voiced (no assimilation) or fully voiceless (assimilation) v-ratios. Concerning C2 Figure 3 also shows a small amount of data subject to progressive assimilation.

Concerning the NV#V contacts (Figure 4) the underlying voice features appear to be less stable than for the V#NV contacts: a very large amount of contacts are assimilated here and assimilation proceeds in both directions, even though assimilation remains mainly regressive.

A global VA rate of 2.7 is measured on a total of 1M alternating consonants. This low alternation rate gives an idea of the instrument's accuracy, as well as of the methodological validity. Alternations can be explained either by decision errors, by noise ("errors") in the observed speech signal: unexpected variants, overlapping music... and more importantly by assimilations. Alternation rates are also examined according to the position of the consonant in the word skeleton: word-internal vs boundary and, for the latter, word-start vs word-end [9].

The data are partitioned into 5 subsets depending on the word boundary type: two assimilating (NV#V, V#NV), two corresponding control (V#V, NV#NV) conditions and a global control condition (NON) including all the remaining items, not considered in the first 4 subsets. Table 1 shows VA rates for C1 (word-final) and for C2 (word-initial).

Using voicing ratio as a measure of voicing degree, incomplete voicing of C1 was found in all situations of C1#C2 consonant contact. Voicing itself is fairly gradient, but this does not entail that voicing assimilation also be gradient. Rather, voicing assimilation might be categorical in French, contrary to claims made in [3]. A more in-depth discussion can be found in [8], where differences in degree of assimilation are also investigated across stop and fricative classes.

Beyond the results presented here, our study shows that the identity of assimilating phoneme sequences, as well as lexical cooccurrence frequency, POS, duration and stress are interfering factors. For the assimilation issue proper, additional insight can be gained by a more extensive study of the link between voicing alternation and these factors.

[2] Tranel, B. 1987. The sounds of French. Cambridge: Cambridge University Press.

[5] Duez, D. 1995. On spontaneous French speech: aspects of the reduction and contextual assimilation of voiced stops. Journal of Phonetics 23, 407-427.