The aim of the study is to examine experimentally heat transfer between the surface of a Silicon single crystal and Superfluid Helium-4. Experimentally, this heat exchange is characterized by the thermal boundary resistance, known as the Kapitza resistance. Determining the temperature dependency of the latter, shall lead to an understanding of heat exchange at a microscopic level and, in particular, of the nature of the phonon (heat carriers) diffusion mechanism, which is determined by the ratio s/l, where s and l are respectively the mean surface roughness and the phonon wavelength [1]. 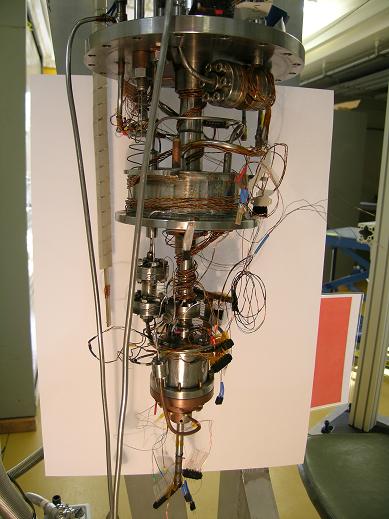 FIGURE 1: He-3 refrigerator with cell

Our previous experimental set-up was limited to the temperature range 1.5-2.1K [2]. Getting access to temperatures as low as 0.3K required the construction of a new cryogenic environment, comprising of a Helium-3 refrigerator (see Figure 1). The characteristic of this refrigerator is a closed-circuit helium-3 circulating system and the cold source is a chamber consisting of liquid helium-3. We use a Helium-3 refrigerator since its cooling capacity (10mW at 1K) is well suited to steady state thermal studies. A new experimental cell was designed and constructed (see Figure 2). The cell consists of a Silicon single crystal rod (6 mm in diameter) which is glued (Stycast 2852 FT) to one extremity of a thin-walled CuNi tube (2/10 mm thickness). A copper Helium-4 reservoir is welded to the other end of the tube. This reservoir is in thermal contact with the cold source of the refrigerator. Three bear-chip Ruthenium oxide thermometers (1mm x 1mm in size) are glued to the crystal at well-known intervals. Three other similar thermometers are inserted into the tube. 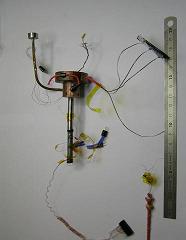 All of these thermometers were calibrated in Superfluid helium prior to the experiment. Two heaters (one made of Manganin wire and the other, a carbon resistor) are placed at the extremity of the crystal and at the top of the cell. The temperature of Helium-4 in the cell is given by a calibrated Germanium (LakeShore) thermometer. The measurements are performed in the following manner: The Superfluid Helium temperature in the tube is maintained constant to within 0.1 mK and the temperature evolution on the crystal side of the interface is recorded in the presence of a heat flux injected from the crystal. 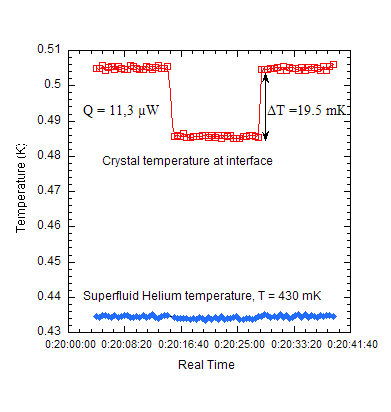 FIGURE 3:A typical measurement at T = 0.43K.The temperature of the Si surface, in contact with superfluid He, undrgoes a 19.5 mK shift in the presence 11.3 µW of heat. The superfuid He temperature remains unchanged. 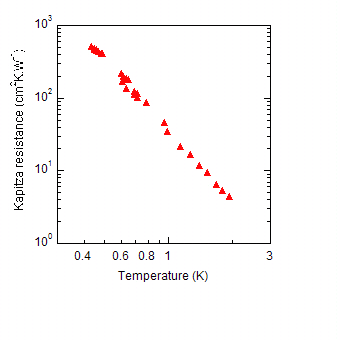 FIGURE 4: Measurements of Kapitza resistance as a function of temperature

We have conducted the first direct measurements of the Kapitza resistance between a Silicon crystal and Superfluid Helium for temperatures ranging from 0.35 K to 2.1K. The results clearly suggest that the bulk properties neither of the solid nor of Superfluid helium influence heat transfer at the interface. Heat transfer thus appears to be entirely governed by phonon diffusion at a nano-metric scale at the interface. New experiments at different pressures of Superfluid Helium-4 are in progress.